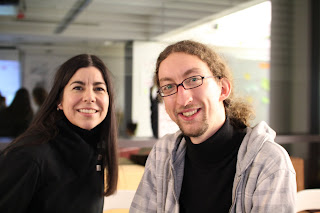 Only three weeks until the Berlinale, February 10-20. We'll be taking interviews at the Berlinale's 31 year-old children and youth section, Generation, at their new location at Der Haus der Kulturen der Welt, which brings the section's two parts, KPlus and 14Plus together again under one roof. Take a look at the press release for a list films in the upcoming program: http://www.berlinale.de/en/presse/pressemitteilungen/generation/kff-presse-detail_8212.html. Explore the rest of the Berlinale site www.berlinale.de for it's many offerings like the Talent Campus (Katy Kavanaugh, participant in 2003, 2004), The European Film Market and the World Cinema Fund.
Posted by The Finding Felix Project at 11:24 PM