On 15 February, Kurzfilm I, the program of short films for the youngest filmgoers, ages 4 and up, brings in masses of school children to fill the 1000 - seat theater. Festival Director Maryanne Redpath says, "It's always on the first Tuesday and it's always an extraordinary scene." That it was, with school groups coming early and planting themselves on the lobby floor for snacktime, some nearly forty-five minutes before showtime. This gave us a wonderful opportunity to find out just how many first memories of international films were being made on this day. That is indeed extraordinary. Studies in cognitive development state that the recognition of the first event in conversation will help secure the memory. We hope to have helped in that regard today, despite the stumbles in the interviewer's elementary German.

Posted by The Finding Felix Project at 11:51 AM No comments:

Email ThisBlogThis!Share to TwitterShare to FacebookShare to Pinterest
Labels: 4 and up, first memory, Generation, Haus der Kulturen, Kurzfilm I, youngest

A family with two sets of twins, infants and five year old girls, have brought their daughters to the Berlinale since they were two years old. They don't watch television so look forward to the annual program at the film festival. Dad says the girls have a collection of short films which they watch often and know in detail.
Posted by The Finding Felix Project at 6:27 AM No comments:

Dieter Thomas, son of two school teachers, Chef de Cuisine and writer, is not short on thoughts and ideas. His vivid memory of his first international film came with a vivid memory of the day around the viewing: the town's local theater wanted to fill the vacant daytime hours with films for school children.
Posted by The Finding Felix Project at 1:34 PM No comments: 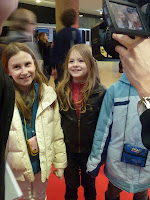 More filmgoers and young journalists telling us about their memories of their first international films at the opening night of the Generation section of the Berlinale. 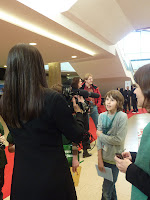 The two lead performers from Opening Night film from Norway, "Jørgen + Anne = Sant" on the redc 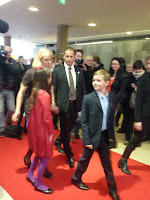 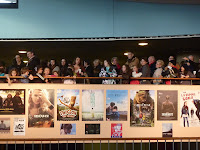 Filmgoers waiting to enter the 1025-seat capacity theater. Posters of each Generation film, feature and short, line the balustrade.


Photos: Gintare Malinauskaite
Posted by The Finding Felix Project at 3:15 PM No comments: 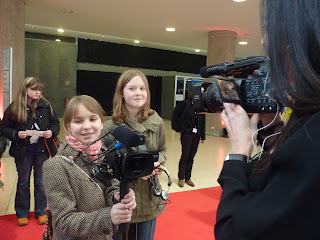 Opening night of the Berlinale Generation section brought out the youngest journalists, the youngest performers and the youngest audience members along with adult counterparts to each. The Opening Night film was the Norwegian film "Jørgen + Anne = Sant" a funny, sensitively and authentically told story of fifth-grade love.


Photos: Gintare Malinauskaite
Posted by The Finding Felix Project at 10:12 AM No comments: