The Children's Filmfest at the Mill Valley Film Festival is 20 year old.


The Children's Filmfest at the Mill Valley Film Festival is 20 years-old this year.

With ground work done in 1993 with my first program, Films for People 4 and UP, the festival allowed me to return from my year at the Chicago Children's International Film Festival to establish the Children's Filmfest in 1995.

I wrote the following in an application for a role as a Learning Designer with a firm I've admired since learning so much about it in graduate school. This paragraph is a "Little darling" that I had to do away with from that text, but couldn't part with it because its history is so dear to me and my development as researcher, filmmaker, designer - contributor.

The Academy Award Winning film, “The Fantastic Voyage” (US1966) curated for the newly established Children’s Filmfest at the Mill Valley Filmfest did as I had designed it to do: it generated wonder about the human body. This was  evident  in vibrant conversation between the young audience, the director, Richard Fleischer, and his medical consultant. “Is it really that loud in the heart?” a seven year-old boy asked.  Fleischer responded that he had used actual recordings of the heartbeat and put himself inside the sound in a sound booth so he could understand what it would be like inside a heart. He imparted his creative combination of Science and Art. I didn’t follow up on this boy -I wouldn't doubt it if he went into Medicine-but I did keep contact with one very impressive child who I met while serving on an award jury in 2001. Felix had spent his childhood seeing films and participating in conversations with directors at the Berlin Film Festival’s children and youth section, more than ten years later I sought evidence of its impact.  That story is here, "Finding Felix."

Posted by The Finding Felix Project at 2:06 PM No comments: 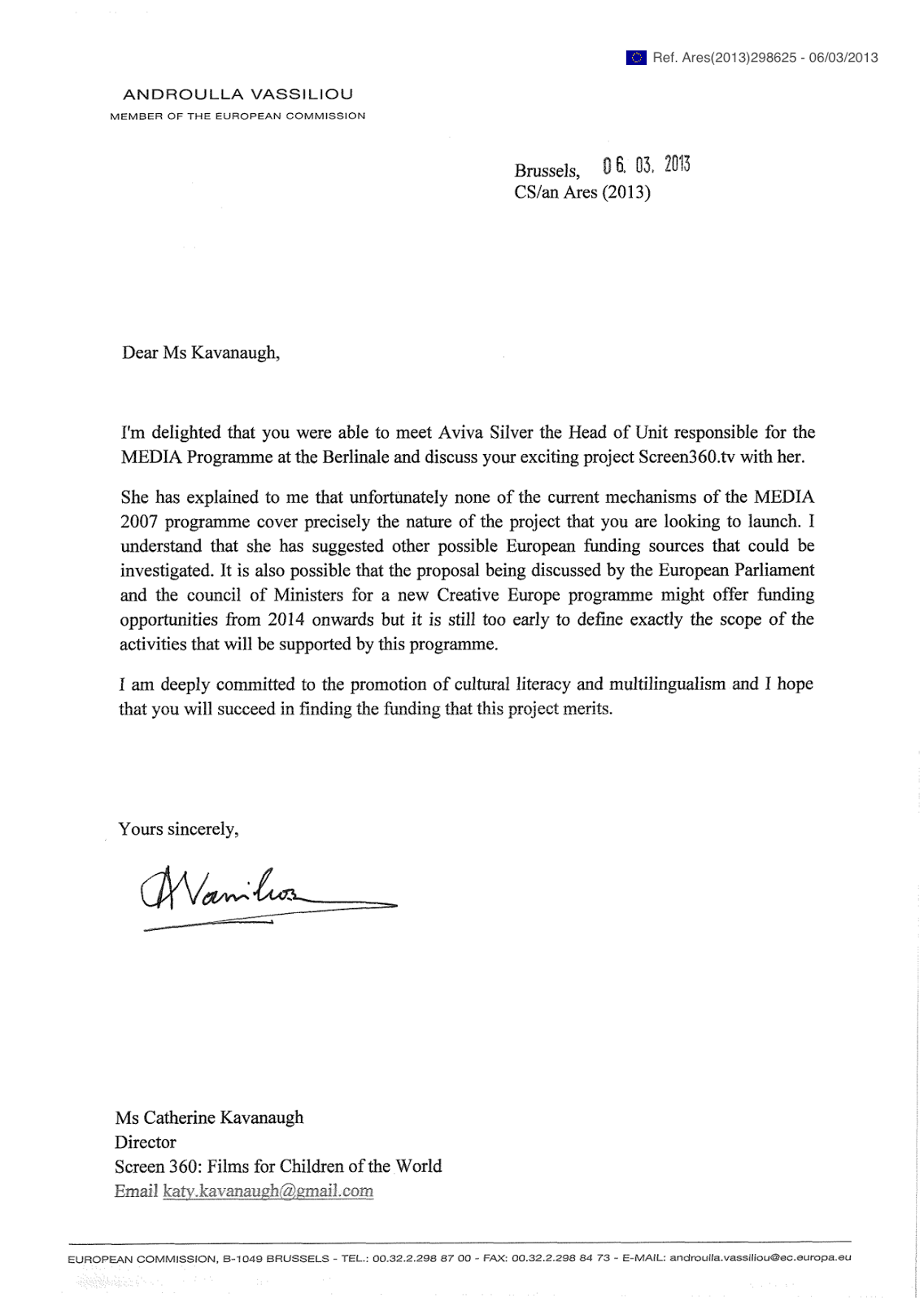 This letter from Androulla Vassiliou, EU Minister of Culture, Education,
Multilingualism and Sport is great encouragement.

Posted by The Finding Felix Project at 10:58 AM No comments:


The German word stille is apparent this morning.  A Sunday morning in the middle of Berlin is stille as I ride through Mitte to the HKW for a 10am film, sunshine and blue sky after a stormy night.
The Biggest House in the World, LA MAS GRANDE CASA DEL MUNDO
Two female co-directors and lead actress reflect the all female focus on screen.  “Where is the papa?” a girl asks during Q&A.  It is explained this is normal to have grandmother, mother and daughter since father is away working somewhere else. A knowing chortle ripples through the crowd. 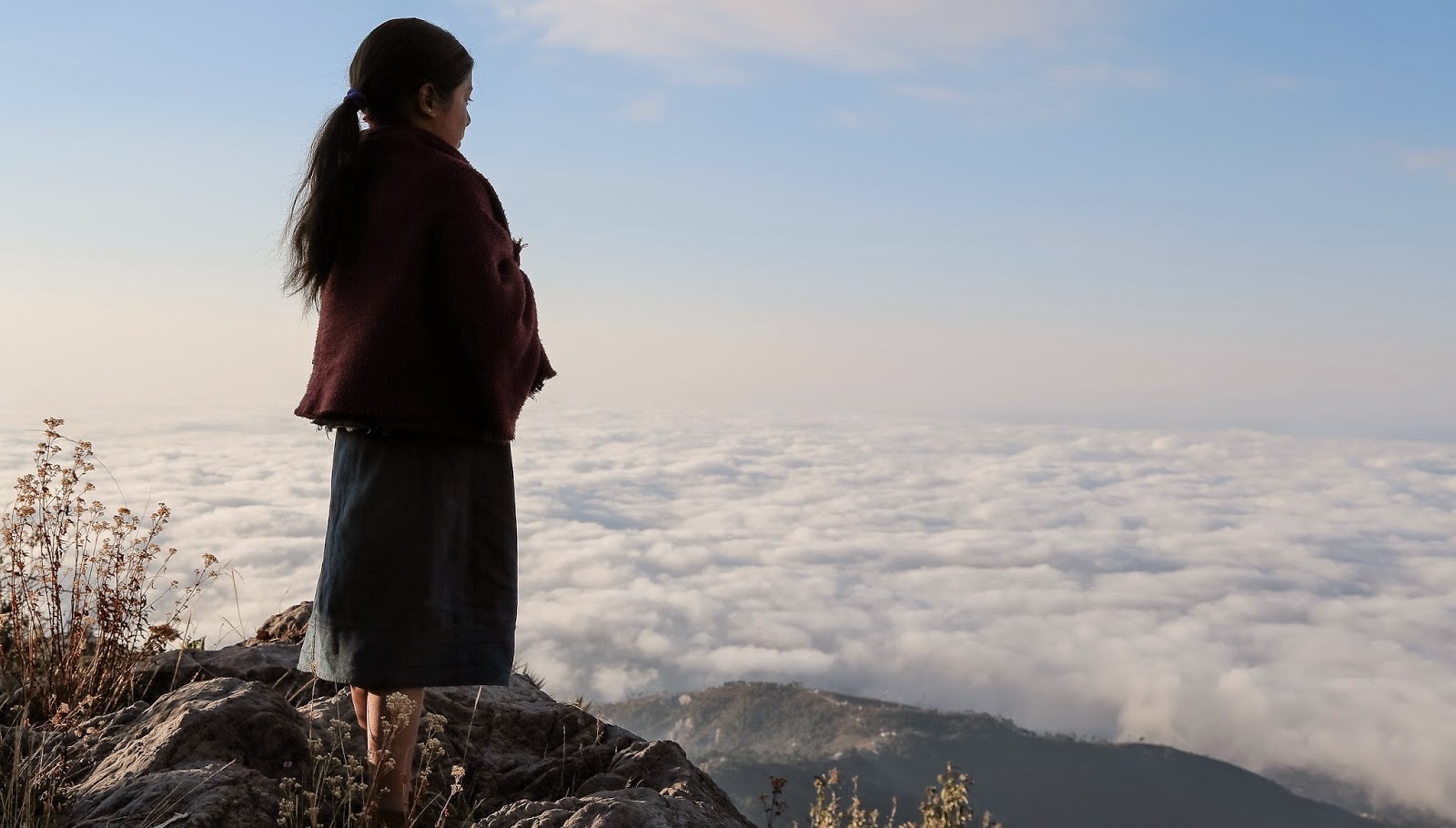 The film had been work-shopped in five or more festivals since 2009 a force of determination…and an encouragement for me and FINDING FELIX.

Yesterday, I met Felix’s (Finding Felix) mother, Erica, as it seems magically regular that I do at the beginning of each festival.  Warmth and respect for her superceeded my unfinished film sheepishness (pun intended) as I greeted her.  She is an introverted mathematician who loves international cinema; the only artform, she said in our 2011 interview, that she likes.

I’ll go to the market to request a meeting at UniFrance…the leader in European film export of films for young audiences to the U.S.

Later today, the Ukrainian film board will give a state of their nation presentation at their market stall.  I will attend.

The Americans at the IFP Stand gave an excellent panel on documentary markets.

Was happy to see Berkeley’s Alice Waters receive an award recognizing her ten years of contribution to the Kulinarische Kino along with Carlo Petrini.  Waters in turn paid tribute to Tom Luddy who introduced her to French Cinema and Marcel Pagnol for whose film her Chez Panisse is named.

Posted by The Finding Felix Project at 2:56 AM No comments:

It is a pleasure to be in Berlin again for the film festival; this time, once again, as an American resident.  Despite my many years participating in this festival, each year begins with a new approach.
My great discovery is not focusing on the films but on attending the market on the opening days:
It’s the start of the festival, people are fresh and ready to receive.  My purpose is doubled this year as I support Gary Meyer’s new film festival Eat, Drink Films, opening in the Bay Area this October.   It is delightful to ask for films for food, wine and children. Most delightful are the faces of the human film archives who are the distribution companies, as they scroll through their mental lists of films with food, wine and children!  As interested as I am to find out about new culinary films, I am very pleased to note that so far, new films for young audiences are more abundant.

The Generation section opens tonight with a feature animation, MINI AND THE MOZZIES from long-loved Danish animator Jannik Halstrup, for the youngest viewers.  The 14+  division of the section opens with PRINCE  (Netherlands) by Sam de Jong.

Americans in the line-up, showing a considerable increase in the past few years:

KPlus for children up to fourteen years old:

14Plus for fourteen and older:
DIARY OF A TEENAGE GIRL
by Marielle Heller with Kristen Wiig
ONE & TWO by Andrew Droz Palermo

Co-production films from Afghanistan and Irak make an important show in the program.
HADIATT IDI (Irak/GB/Niederland/USA) tells the story of a boy remembering his parents’ death.

MINA WALKING (Kanada, Afghanistan) shows the turning point for a 12 year-old girl in a country dominated by men, who holds everything in her family together but knows there is something else.

Posted by The Finding Felix Project at 2:36 AM No comments: